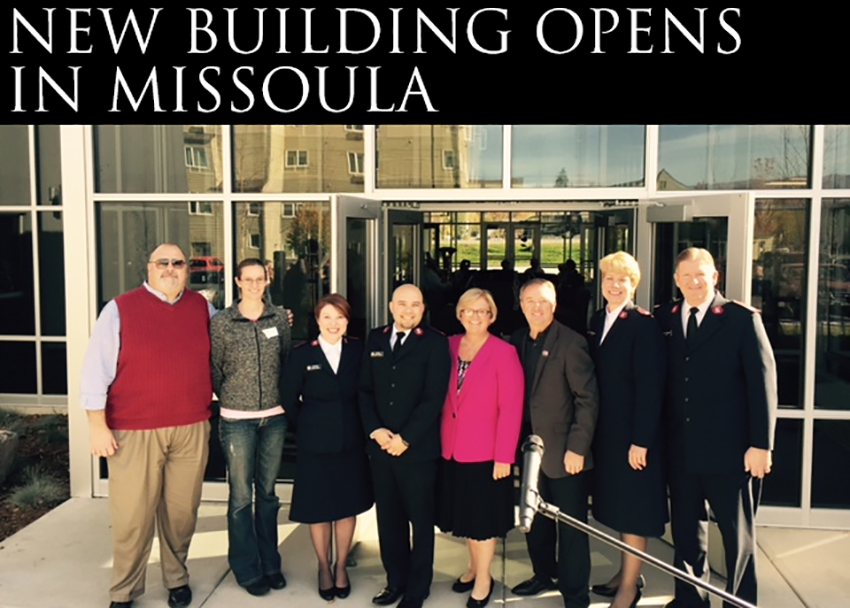 The Salvation Army in Missoula, MT, celebrated the grand opening of its new building, October 16 – 18, 2015. The new building is located at 355 S. Russell Street (behind the Good Food Store).

The Salvation Army was previously located on West Broadway Street. In 2013, the building was sold to Stockman Bank and construction began on The Army’s new site. The land for the new building has been owned by The Salvation Army for many years, and is adjacent to its Silvercrest apartment building (affordable housing for seniors). Construction costs for the new building were funded by the sale of the downtown property and internal trusts of The Army.

After the ceremony, guests enjoyed tours of the new building and light refreshments. Festivities will continue throughout the weekend:

The overall space of the new facility is 11,500 (increased from 10,000 square feet). The facility includes classrooms for youth character-building programs, commercial-grade kitchen and dining hall for community meals, food and clothing banks, a hygiene center (shower and laundry facilities for our homeless neighbors), case worker offices, and a church for Sunday services. The building also include a large room that can be rented at low cost for community activities.

“We outgrew our previous location years ago,” said Lt. Joshua Hamilton. “Fortunately, our old building was in a desirable location downtown, and Stockman Bank purchased it. That purchase enabled us to expand our services in Missoula. It’s a win-win for everyone.”

Established in 1894, The Salvation Army Missoula Corps provides services to families in need throughout the community. On a daily basis, The Salvation Army serves families and individuals in need of basic services such as showers, laundry, and emergency food boxes. Seasonally, The Salvation distributes school supplies (this year distributing 1,000 backpacks in conjunction with other community agencies) and Christmas assistance (including food boxes and toys with Toys for Tots to more than 400 families). Through grants and community support, more than 200 families were given rental and mortgage assistance in 2014 which kept them from becoming homeless.

The new building was designed by the Missoula office of CTA Architects. Missoula-based Quality Construction was the contractor.

The Salvation Army relies on donations from the community to provide services to local families in need. Donations can be made online at Missoula.SalvationArmyNW.org.